Below is a recent article from the MIAMI Association of REALTORS (MIAMI) and the Multiple Listing Service (MLS) system. I am proud to work at EWM the #1 Brokerage in Miami-Dade. 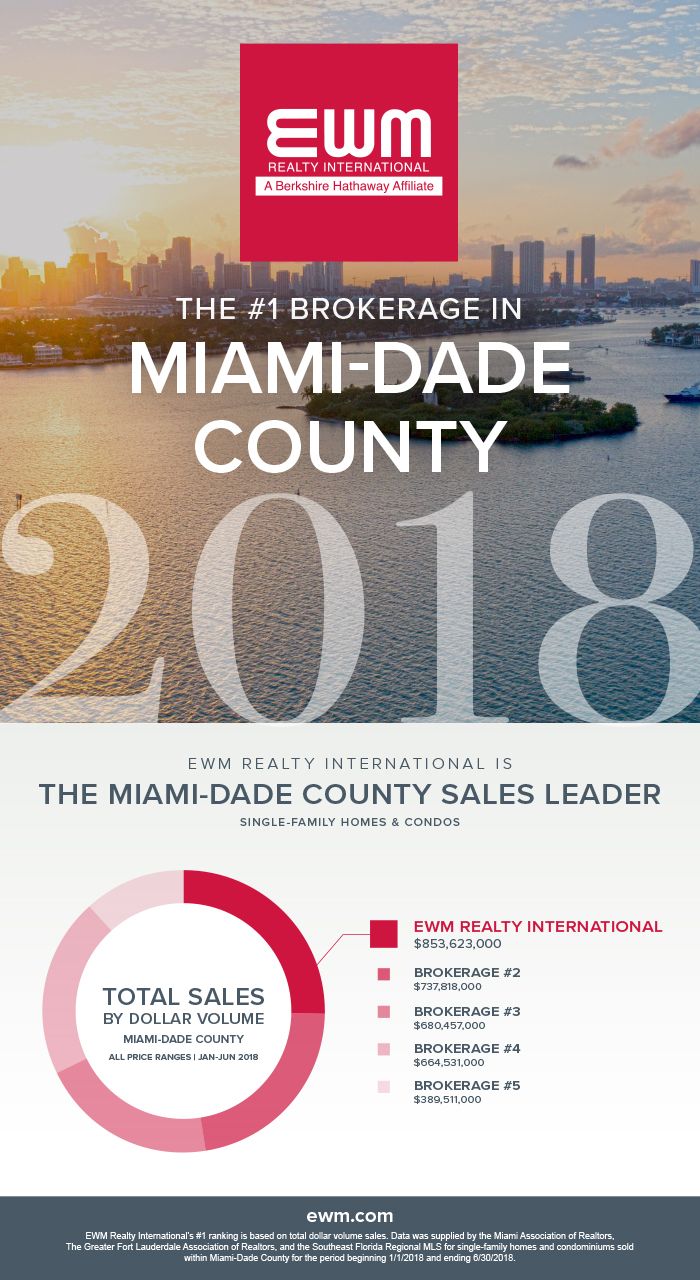 by | Oct 19, 2018
Total Miami-Dade County home sales surged 35.7 percent last month a year after Hurricane Irma brought minimal damage and stalled hundreds of sales in September 2017, according to a new report by the MIAMI Association of REALTORS® (MIAMI) and the Multiple Listing Service (MLS) system.

“Miami is one of the most resilient communities in the world and our real estate market embodied that resiliency by bouncing back as expected from stalled transactions in September 2017,” said MIAMI Chairman of the Board George C. Jalil, a Miami broker. “The sales growth continues a trend of increased Miami home sales, particularly in the existing condo market.”

Miami Existing Condo Sales Have Increased in Seven of the last Nine Months
Miami existing condo sales increased 29.5 percent year-over-year in September, from 804 to 1,041. The Miami market has registered 10,531 existing condo sales year to date, an increase of 5.2 percent from this time last year.

Lack of access to mortgage loans continues to inhibit further growth of the existing condominium market. Of the 9,307 condominium buildings in Miami-Dade and Broward counties, only 12 are approved for Federal Housing Administration loans, down from 29 last year, according to Florida Department of Business and Professional Regulation and FHA.

Nationally, distressed sales accounted for 3 percent of sales (lowest since NAR began tracking in October 2008), down from 4 percent a year ago.

The median time to contract for condos was 70 days, a 4.1 percent decrease from 73 days last year. The median number of days between listing date and closing date decreased 7.5 percent to 111 days.

The national median existing-home price for all housing types in September was $258,100, up 4.2 percent from September 2017 ($247,600). September's price increase marks the 79th straight month of year-over-year gains.

Miami’s high percentage of cash sales reflects South Florida’s ability to attract a diverse number of international home buyers, who tend to purchase properties in all cash. Miami has a higher percent of cash sales for condos due to lack of financing approvals for buildings.

Condominiums comprise a large portion of Miami’s cash purchases as 48.9 percent of condo closings were made in cash in August compared to 21.1 percent of single-family home sales.

Total active listings at the end of September increased 5.7 percent year-over-year, from 20,894 to 22,087. Active listings remain about 60 percent below 2008 levels when sales bottomed.

New listings of Miami single-family homes increased 73.9 percent to 1,682 from 967. New listings of condominiums increased 59.9 percent, from 1,429 to 2,285. The numbers are impacted from the stalled transactions after Hurricane Irma in September 2017.

Nationally, total housing inventory at the end of September decreased from 1.91 million in August to 1.88 million existing homes available for sale, and is up from 1.86 million a year ago. Unsold inventory is at a 4.4-month supply at the current sales pace, up from 4.3 last month and 4.2 months a year ago.

Note: Statistics in this news release may vary depending on reporting dates. MIAMI reports exact statistics directly from its MLS system.

2023 South Florida Real Estate Market Report
On a daily basis I am asked How is the real estate market? When...


> Learn More
Salute to Military Service Members and Veterans
CHOOSE YOUR REALTOR WISELY !   THANK YOU FOR SERVING IN THE MILITARY! ARE...